All in a Day’s Eye: The Politics of Innocence in the Javett Art Collection 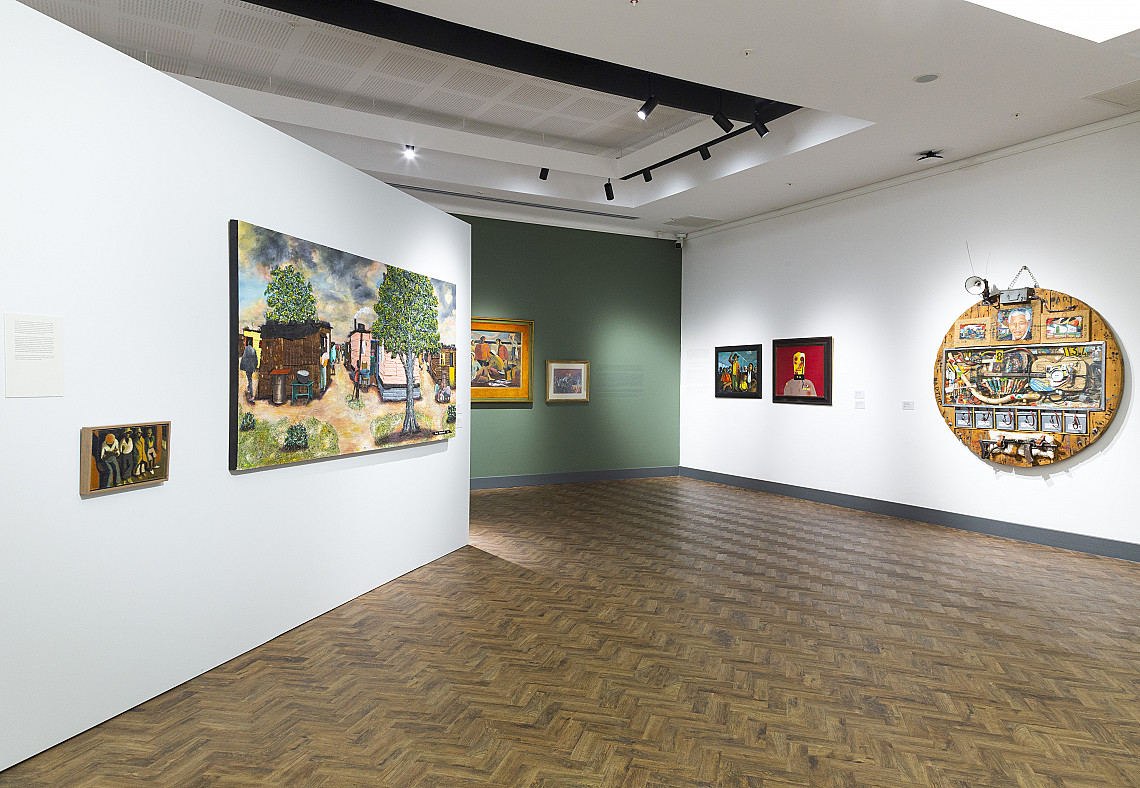 The Javett Art Collection is as much a collection of works of art as it is a collection of histories recorded by artists in South Africa over a period of time. A close look into the collection uncovers themes ranging from education, culture, architecture, the natural environment, representation, beauty, the land, religion and politics, to name just a few.

This curatorial proposal wants to grapple with these themes by rethinking and rearranging the way we look, think and write about the works from the modernists of the 20th century (and beyond). All in a Day’s Eye proposes a refreshed look into these works, one that goes beyond reading them through their formalistic characteristics; beauty, light, colour, brush strokes and influences but rather opens them up to how we can also understand them through the lens of the political climate they were produced under. In that way the works are stripped of their perceived innocence in order to allow for the uncovering of layers of knowledge, which often remain unrecorded.

If, as an example, we are to begin this exploration with a painting by Ivanonia Roworth (1920-2018) titled “The Return from School, Genadendal” (1954) we will be able to uncover and understand a lot about the intricacies of the lesser known versions of our history. The fact that this painting was produced in 1954 marks it as a work created within a rapidly shifting political landscape, 1954 being the year of commencement of the Bantu Education Act of 1953 (1 January 1954). The seemingly mundane event of returning from school takes place in Genadendal; a town that, at the formal end of slavery in the Cape Colony (1838) became a sanctuary for more than 1000 freed formerly enslaved people. The return from school takes place in this town also known to have had the first teacher’s training college in South Africa, founded in the same year (1838). It is a place of the first mission station (of the Moravian Church) founded by George Schmidt. In 1995 Nelson Mandela visited the town, whose name means “Valley of Grace,” and named his residence at Tuynhuys after it. The teacher training college, also founded by Schmidt, was closed in 1926 by the white dominated government who felt that “coloured” people were better suited to laboring on farms.

The painting therefore creates bridges that help us to re-understand the history of education in South Africa. It helps us to frame and situate this curatorial project within current questions around the future of education, posed within an institution of higher learning with a problematic history which is currently being actively transformed and decolonized – the Javett Art Centre being very much part of that process.

The curatorial project will be research and education orientated. The curator will gather a small team of researchers who will study and generate texts that will serve as mediation tools for learners of different ages, students and the general public. The researchers are drawn from younger artists and art historians whose creative work is interested in the relationship between art and history - how art can contexualize histories and how it can affect our understanding of historical narratives.

In its core, the project centers education and alternative forms of producing and disseminating knowledge. We will study the works by considering urgencies of the present in the political sphere as it affects ordinary people’s lives. “The political” here is understood as the relationship between personal experiences and larger social and political structures.

The research team along side the curator will generate texts that will be presented as wall texts in the exhibition and will also be used for an educational supplement that will accompany the exhibition. This process will also help group work according to themes. These themes should however remain open and can later be re-arranged by students at UP as part of their academic programme.

The educational supplement can be used by learners, students and the general public. It will feature selected colour images from works in the collection. It will also feature interactive exercises for younger learners that can be done in classrooms or within the exhibition. The supplement will be educational but not didactic, that is, it will stimulate users to formulate their own questions, develop their own interactive exercises and interpretation tools.

The exhibition will feature a large percentage of works from the collection which will be presented in ways that allow for spaces of contemplation. Selected works will be accompanied by extended texts whilst other work will have shorter texts and quotes from existing literature, idioms, proverbs etc. The exhibition will be part of a larger dialogue connecting narrative strands from the three exhibitions put together for the opening of the Javett Art Center.

Where suitable, within the exhibition or educational supplement, constellations with images and text from other references will be used to extend meaning and point towards gaps.

The research team will work for a period of ten weeks communicating in person and via online platforms. A writing weekend retreat will be necessary and will allow for an intensified writing and editorial process.

An editor and copy editor will be identified to assist with the process. A graphic designer for the educational supplement and online content will also be identified.

Since the early 2000s, Gabi Ngcobo has been engaged in collaborative artistic, curatorial, and educational projects in South Africa and on an international scope. She is a founding member of the Johannesburg based collaborative platforms NGO – Nothing Gets Organised and Center for Historical Reenactments (CHR, 2010–14). NGO focusses on processes of self-organization that take place outside of predetermined structures, definitions, contexts, or forms. CHR responded to the demands of the moment through an exploration of how historical legacies impact and resonate within contemporary art. Recently Ngcobo curated the 10th Berlin Biennale, 2018, and co-curated the 32nd Bienal de São Paulo, 2016, which took place at the Ciccillo Matarazzo Pavilion in São Paulo, BR, as well as A Labour of Love, 2015, at Weltkulturen Museum, Frankfurt am Main, DE and Johannesburg Art Gallery, 2017. She has worked at the Iziko South African National Gallery in Cape Town, SA, and at the Cape Africa Platform where she co-curated the Cape07 Biennale, 2007, Cape Town, SA.

In the past she has collaborated with various institutions including Centro Atlantico de Arte Moderno (CAAM), Las Palmas de Gran Canaria, ES; Durban Art Gallery, SA; Joburg Art Fair, Johannesburg, SA; Johannesburg Workshop in Theory and Criticism (JWTC), Johannesburg, SA; LUMA/Westbau, Pool, Zurich, CH; New Museum, Museum as Hub, New York, US; and Raw Material Company, Dakar, SN, among others. She has been teaching at the Wits School of Arts, University of Witswatersrand, SA since 2011. Her writings have been published in various catalogues, books, and journals.

Donna Kukama is an interdisciplinary artist whose practice engages performance art as a tool for creative research. Her work presents institutions, History book chapters, monuments, gestures of protest, and memories that are as real as they are fictitious. Shifting between performance, video, text, sound, and multimedia installations, her practice takes on a form that is experimental, applying methods that are deliberately undisciplined. She uses performance as a strategy that allows her to invent as well as to apply methods that are outside the canon of what is predictable or expected. She questions how histories are narrated and subverts how value systems are constructed. Through her practice, she weaves major with minor aspects of histories, introducing fragile and brief moments of ‘strangeness’ within sociopolitical settings. Her performances are to be understood as poetic gestures (with political intent) that address an urgent need to destabilize existing canons regarding the ways we look at reality. For Kukama, performance becomes a strategy for inserting foreign ‘undocumented’ voices and presences into history by occupying sites and territories that remember less-told Histories.

Kukama’s current practice exists as a History Book that is not limited to the physical form of bound paper with written text. This body of work has taken the form of performances, text, objects, memories, drawing, installation, and soundings specifically related to monuments/memorials/commemorations for those who absolutely need to be remembered. The book was originally conceived as a tool for questioning and rethinking memorials, monuments, and national commemorations within the South African landscape, and has since presented chapters in a range of other contexts; each chapter physically revisiting sites of violence (physical/discursive, personal/public) directed at and experienced by socially, structurally, and economically marginalized bodies.

Simnikiwe Buhlungu is a multidisciplinary artist living and working in Johannesburg, South Africa. She holds a BA (Fine Art) degree from the University of the Witwatersrand, Johannesburg. Her work has existed in a variety of forms - texts, prints, videos, sonic negotiations and installations - though a number of exhibitions and spaces locally and abroad. Buhlungu also engages with publications - their (self-production and dissemination - in conversation with her practice. She has participated in international residencies, namely the WIELS residency program in Brussels, Belgium (2018) and the Future Assembly residency between London and Cambridge (UK) and Lagos (Nigeria) [upcoming 2019].

She is the founding member of the former Johannesburg based collective, “Title in Transgression”. Recent projects through the collective include Mangolo research project, which traces solidarity letter writing initiatives between Sweden and South Africa in the 1980’s. Part of this research was presented as part of the public programme of the 10th Berlin Biennale for Contemporary Art “I’m Not Who You Think I’m Not” (2018). Buhlungu will participate in the Bergen Assembly, Norway alongside fellow artist Malebona Maphutse where they will revisit their former collective, ‘Title in Transgression’ in the context of the Bergen Assembly’s theme “Actually, The Dead Are Not Dead.”

Tšhegofatso Mabaso is an artist and curator currently working in Johannesburg. She holds an MA in History of Art (University of the Witwatersrand) and is a co-founder of Rera Letsema, a Johannesburg based research collaborative. In 2016 Mabaso co-curated Situation, a group exhibition at The Point of Order and the Wits Young Artist Award Exhibition, Frequently Asked Questions (2017) alongside Thato Mogotsi. She recently co-curated The Art of Lithography: A Collaborative Expression of LL Editions (2018-2019) at the Wits Art Museum as well as - and counting (2019) at Johannesburg Art Gallery. Mabaso has been a sessional lecturer in the Wits School of Arts, History of Art Department and a lecturer at the Rhodes University Fine Art department.

WE’RE NOT MAKING THIS UP!

The Center for Historical Reenactments (CHR)

THEY WILL NEVER KILL US ALL