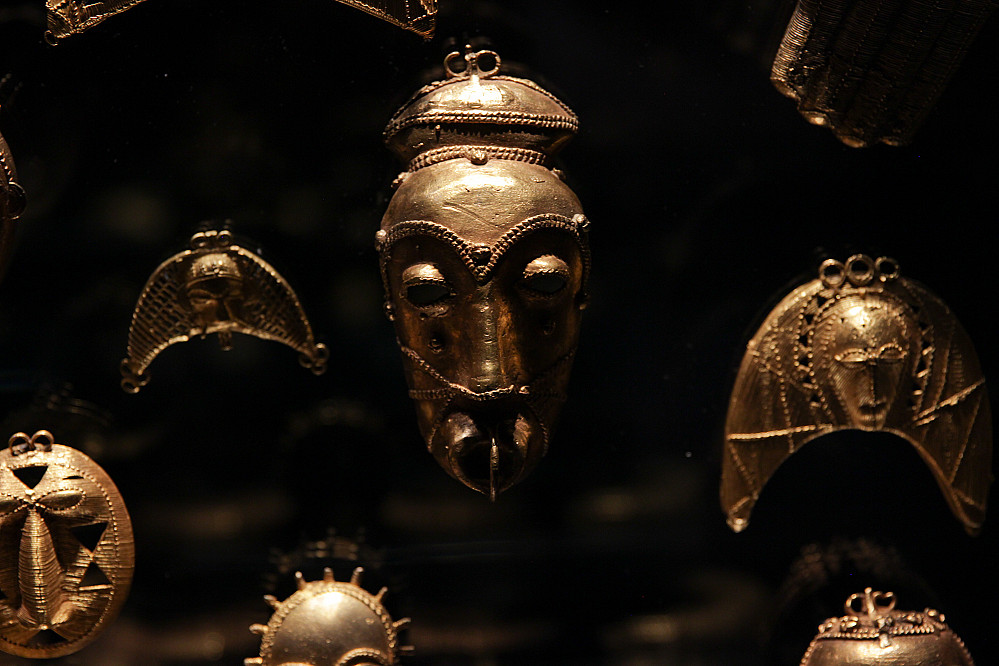 The allure of gold has motivated humanity to great heights and depths of achievement and destruction. Its glitter, timeless properties and ability to be transformed into objects of beauty and desire have driven this fascination and the many legends and characters surrounding gold: Eldorado, Prester John, Mansa Musa, Queen of Sheba, King Solomon's mines, and the Kruger millions among others. Carried along the trade routes of Africa through the Sahara and down the Nile and across the Indian Ocean and Mediterranean Sea. African gold has been the currency of kings and the symbol of power and wealth the world over.

The Barbier-Mueller Collection was begun in 1922 by Joseph Mueller, a Swiss Art collector, and formed part of the collection of African art he assembled over a fifty-year period. His daughter, Monique and her husband Jean-Paul Barbier continued his passion for collecting art, establishing the Barbier-Mueller Museum in Geneva, Switzerland which with its diverse collections has become world-renowned. The high level of craftsmanship evident in the pieces in the Barbier-Mueller collection of gold artefacts tells of thousands of years of artistry, with the knowledge acquired in the ranks in the revered and privileged profession of the goldsmith being passed down from father to son.

The objective of extending the footprint of the work of the Barbier-Mueller Museums to Africa though the collaboration furthers the ideal of creating a nucleus of scholarship and appreciation of the art of Africa in Africa however in 2018, due to refocused priorities the Gold of Africa Museum closed and the collection remained in secure storage. In continuing this objective, it is therefore apt that in September 2019, the collection was re-housed at the brand-new Javett Art Centre at the University of Pretoria.

This relocation is significant in that it provides easy access to the collection for scholars and members of the public seven days a week and is housed in a 'tower' specifically designed to effectively present the collection, along with selected items from the Mapungubwe gold collection from Limpopo.  AngloGold Ashanti is a valuable partner in the Javett-UP's quest to explore, interrogate, investigate and celebrate the Art of Africa.